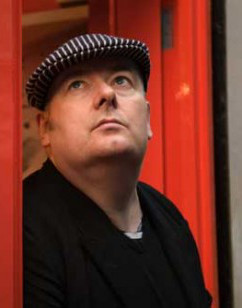 Shaw was born in St Asaph, Denbighshire, and took his music degree at the University of London. His career in performance began in the 1980s on the Alternative Cabaret Circuit, alongside such performers as Julian Clary, Rory Bremner and Jo Brand. At the same time, he was playing in piano bars and at festivals in London and throughout Europe.

In 1990 he toured Europe and recorded with fellow singer Carol Grimes. Since this time, Shaw has regularly worked in duo settings with other singers, including Claire Martin, Linda Lewis, Liane Carroll, and Sarah Jane Morris. By the mid-1990s, he was regularly performing at Ronnie Scott's Jazz Club and in 1995 released two albums on the club's Jazzhouse label - Ghosthouse and a tribute to Richard Rodgers and Lorenz Hart Taking It To Hart. In 1996, Shaw led his own 'Very Big Band' on a UK tour, and by the late 90s he was performing regularly in USA. In 1999 he released In A New York Minute the first of two albums on New York's Milestone label. This and Soho Stories, released in 2001, featured many US musicians including Cedar Walton, Lew Soloff, and Eric Alexander. A World Still Turning from 2003 saw him working with Billy Childs and Peter Washington, and guest vocalist Mark Murphy.

Shaw has continued to work regularly with Claire Martin, co-hosting the 2004 BBC Jazz Awards with her and appearing with her on the BBC Radio 2 show Big Band Special, a show that he has also presented. Shaw also presented a jazz show on BBC South with Charlie Crocker. He won in the Best Jazz Vocalist category at the BBC Jazz Awards in 2004 and 2007.

A 2006 album on Linn Records saw Shaw paying tribute to songwriter Joni Mitchell. Drawn To All Things was followed in 2008 by an autobiographical album Lifejacket, which showcased his songwriting for the first time. Somewhere Towards Love from 2009 was an intimate album of voice and piano release by Splashpoint Records. The title song, written again by Shaw, was chosen by the Welsh artist Molly Parkin as one of her Desert Island Discs. In 2011, Splashpoint released The Abbey Road Sessions where Shaw is again joined by a band, this time including legendary jazz bass player, Peter Ind. Shaw has continued to perform regularly at festivals and jazz clubs in the UK including regular shows at the Vortex Jazz Club, Ronnie Scott's, 606 Club and the PizzaExpress Jazz Club. International appearances have included Canada, USA, Dubai, Belarus, France, Italy and Germany.

As an actor, Shaw performed in Jerry Springer: The Opera in the role of warm-up man/devil, which was created for him by Richard Thomas. In 2005, Shaw appeared as Percy in the film Pierrepoint.[2][3] Shaw returned to comedy in 2011, touring widely with Rory Bremner. In 2012 he presented his one man show A Bit of a Mouthful at the Edinburgh Festival.

"A Bit Of A Mouthful is a show I do all on my own, rather than with a jazz trio, a Big Band… or a full orchestra. It's a collection of musical observations (with the odd sing-along!) charting the (ahem!) early middle years of an overwrought, overweight homosexual, in and out of love… but constantly (aren't we all?) on the prowl. When I was writing the show, the lyrics often came out a bit "Tourettsey" and for this I'm afraid I have to make no apology!"[4]

In July 2013 he appeared as guest artist with Jazz singer Clare Teal and the BBC Radio Leeds Community Big Band at the Royal Hall, Harrogate with A J Brown and Sir Tim Rice.