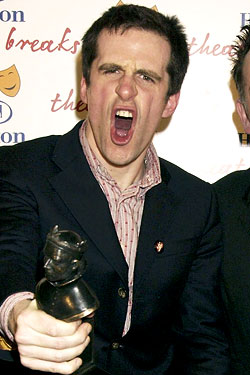 Richard Thomas
Richard Thomas (born 1964) is a gay musician, writer, and comedy actor. He is best known for composing the award-winning Jerry Springer: The Opera with Stewart Lee.[1] Thomas collected the Laurence Olivier Award for Best Musical Score in 2004.[2]

Richard Thomas's comedy career began in 1987, doing a musical act on keyboards. In 2000, he wrote and performed a one-act opera called Tourette’s Diva with four actors, which aired at the Edinburgh Festival Fringe. Thomas had the idea for an opera based on Jerry Springer at this time, and wrote it over the next two years, chiefly in workshops at Battersea Arts Centre. Thomas would offer a "Beer for an Idea", where any audience members submitting a good idea would be rewarded with a can of Foster's (and poor ideas with a supermarket store brand).

After a number of small scale performances of the first act, which was in much the same shape as it remains today, the second act (where the characters descend into hell) was vague and unformed. Thomas brought his friend Stewart Lee in to assist with the writing. Six months later, the opera was in a far more recognisable state, and was snapped up by the National Theatre.

Thomas wrote the libretto for Mark-Anthony Turnage's 2011 opera Anna Nicole,[3] and co-wrote music for the 2010 film Uncle David as a part of the Avant-Garde Alliance.