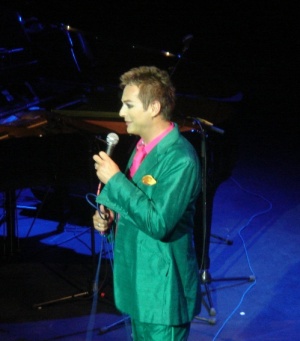 He was born in Surbiton and brought up in Teddington. He went to school at Ealing, where he suffered homophobic bullying.[1] He studied English and Drama at Goldsmiths' College, University of London. He entered the alternative comedy scene in the early 1980s, first as "Gillian Pieface", and later as "The Joan Collins Fanclub". He wore heavy glam make-up and dressed in outrageous clothes, often involving leather/PVC and hinting at bondage. His pet whippet "Fanny the Wonder Dog", also featured in performances.

He became a well-know TV personality in the late 1980s with shows such as Sticky Moments with Julian Clary and Terry and Julian.

In more recent years he has regularly appeared in pantomime, and had parts in films and television programmes. In 2012 he was the winner in Celebrity Big Brother.

He has published an autobiography, A Young Man's Passage, and several novels.

According to the Internet Movie Database, he lives in a house once owned by Noel Coward.[3]

He now lives in Aldington, Kent, in the house formerly owned by Sir Noël Coward.