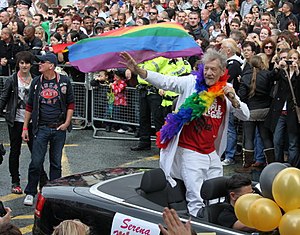 Sir Ian McKellen at Manchester Pride 2010, in a car marked "Serena"
Sir Ian Murray McKellen, CH, CBE (born 1939) is an English actor, known for his role as Gandalf in the Lord of the Rings trilogy, as well as for many roles from Shakespearean to modern theatre. In 1998 he announced publicly that he was gay. He is a prominent spokesman for Stonewall Equality Limited and was one of its founding members.

He was born in Burnley, Lancashire, and studied English Literature at St Catharine's College, Cambridge.

He was knighted in 1991 for services to the performing arts. Following his knighthood he became known within the gay community as "Serena".