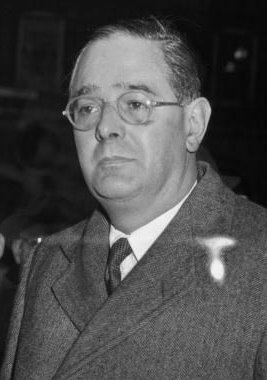 Ian Harvey
Ian Harvey (1914–1987) was a businessman and Conservative politician.

From 1950 to 1959 he was MP for Harrow East. In 1958 he was appointed a Parliamentary Under-Secretary of State at the Foreign Office.

In November 1958, Harvey and a Guardsman from the Coldstream Guards were found in the bushes in St James's Park and arrested; Harvey tried to escape, and attempted to give a false name on arrest. Both were charged with gross indecency and breach of the park regulations; at the trial, the indecency charge was dropped and both were fined £5.[1] Harvey subsequently resigned his ministerial post and his seat in Parliament; he paid the guardsman's fine as well as his own.[2]

Following his resignation, Ian Harvey returned to his previous work in public relations. In 1972 he was appointed a Vice-President of CHE, and from 1980 onwards he was Chairman of the Conservative Group for Homosexual Equality.

He wrote about his life in a book, To fall like Lucifer.