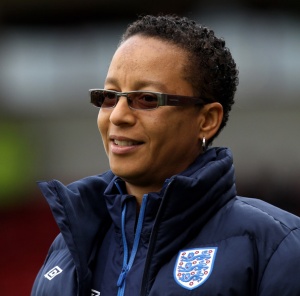 During her playing career, she won 66 England caps for England, scoring 35 goals. She made her England debut at the age of 16, and went on to play in the 1995 FIFA Women's World Cup, England's first World Cup appearance. She was also vice-captain of her country. At club level, she played for Millwall Lionesses for nine years and won the FA Women's Cup three times, including a league and Cup double as captain of Croydon in 1996.

She received an OBE in 2002 and a CBE in 2003. It was speculated that Powell would become the first female manager in men's football when she was linked with the vacant managerial role at Grimsby Town FC in October 2009.[1]

Powell is lesbian. During her playing career she had embarked on heterosexual relationships with men, who were "intrigued" to discover that she was a footballer.[2]

Hope Powell has been selected as a football coach in the London 2012 Olympics.[3]

In August 2013 she was sacked as coach of the England women's team, a post she had held since 1998, following the team's poor showing in the Euro 2013 competition.