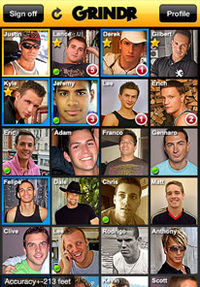 It was initially launched in the USA in 2009, but as of June 2012, London topped the list of cities with 350,000 users, and the local system crashed, possibly as a result of the arrival in London of Olympic athletes[1] British users increased by 30,000 in 2009 after Stephen Fry mentioned it on the TV show Top Gear.[2]

members have the option to categorise themselves in one of the following "Grindr Tribes":[3]