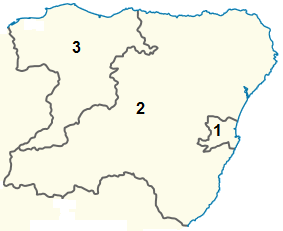 Former Grampian region:
1 Aberdeen City
2 Aberdeenshire
3 Moray
Grampian was a local government region in Scotland. It was formed in 1974. In 1996 it was abolished and replaced with three unitary authorities: City of Aberdeen, Aberdeenshire, and Moray.

Grampian Police was replaced in 2013 by the Police Service of Scotland.

Craigievar Castle, near Aberdeen, was the home of Sir Ewan Forbes who had his sex officially changed in order to become a baronet.

The preserved website of the former Beyond Barriers project lists the following LGBT resources in the region:[1]