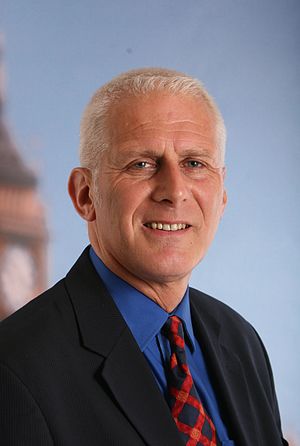 Gordon Marsden
Gordon Marsden, born 1953, is a Labour politician. He has been MP for Blackpool South since 1997.

Gordon Marsden was educated at Stockport Grammar School, an independent school in the city of Stockport in Cheshire, and New College, Oxford. He went on to postgraduate studies at the Warburg Institute (part of the University of London) and Harvard University's Kennedy School of Government, being a Kennedy Scholar in Politics and International Relations.

He came out publicly as gay during the same week as David Borrow in June, 1998.

In 2009 he was listed at number 43 in the Pink News list of 50 most powerful gay, lesbian and bisexual people in British politics. The citation said:

"A strong advocate for the tradition British seaside town, Gordon Marsden came out in 1998 ahead of a debate on the age of consent. A former Open University tutor and editor of History Today magazine, he represents Blackpool South."[1]