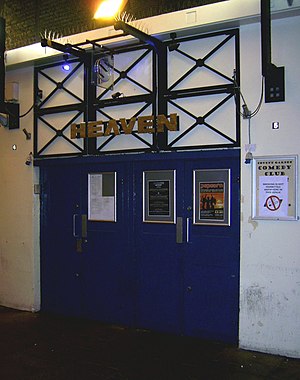 Heaven, the home of G-A-Y

G-A-Y is a gay nightclub in central London. It operated from the London Astoria music venue for 15 years until July 2008. The Boston Globe described it as "London's largest gay-themed club night",[1] NME reported that it "attracts 6,000 clubbers each week",[2] and The Independent described it as "the one London gig that really matters" for "today's pop stars".[3] On Friday 3 October 2008, it moved to famous gay venue Heaven.

G-A-Y is associated with G-A-Y Bar and G-A-Y Late, both of which were also owned by Mean Fiddler Holdings Limited and operate in Soho. The two bars sell discounted tickets to weekend performances, and are locations in which flyer boys operate. The brand was purchased on 13 August 2007 by the MAMA Group.[4][5] 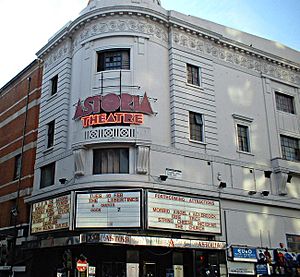 The London Astoria, the home of G-A-Y prior to the move to Heaven
G-A-Y began in 1976 in the Sundown club (in the basement of the London Astoria, subsequently called LA2, and now demolished) as a Monday night event called Bang!, started by club promoters Norman Scott, Damien Tony and Jerry Collins, who worked as a DJ under the name Gary London. During the 1980s, Bang! (Monday and Saturday) and also Propaganda (Thursday) were run by gay club promoter and DJ Colin Peters (Peter Daubeney), whose brother Jamie continued as promoter for a period following his death. In the early 1990s, Bang! was acquired by DJ and promoter Jeremy Joseph who was formerly employed by Peters, who oversaw its change of name to G-A-Y, its expansion from two nights a week to four, and its move from the LA2 to the London Astoria. For some years G-A-Y operated in both venues: the LA2 on Monday and Thursday nights and the London Astoria on Fridays and Saturdays.

On 22 September 2008, MAMA Group acquired Heaven nightclub[6] and the venue is now the home of G-A-Y. The two nightclubs were merged into one with both types of music being played (G-A-Y specialises in pop and commercial, Heaven in House music).

In 2000, a 40-track compilation album was released, featuring songs from some of the artists who had appeared at G-A-Y. A promotional campaign took place in the weeks leading up to release, including television and radio advertisements, a nationwide poster campaign and magazine advertisements in both the gay and teen press.

On Saturday 1 July 2000, a show was held at G-A-Y to promote the release of the album. Seven acts who appeared on the album performed. These acts were Shola Ama, All Saints, Bananarama, Dina Carroll, Billie Piper, Honeyz and Louise Redknapp. Each act performed one song, apart from Louise, who also performed her new single "2 Faced".

The G-A-Y album was released on Monday 3 July 2000 and peaked at number 18 in the UK compilations chart. 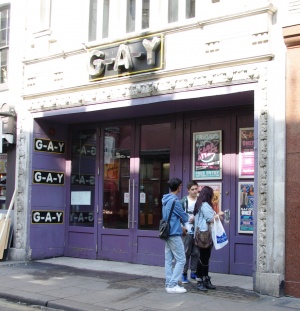 G-A-Y bar, Old Compton Street
The G-A-Y brand has expanded to two other bars in the area. G-A-Y Late (located near the former Astoria site) and G-A-Y bar (located nearby in Soho's Old Compton Street). In April 2011, the G-A-Y brand arrived on Manchester's Canal Street with G-A-Y Manchester opening in the former venue of Spirit Bar.[7] The brand is now 100% owned by Jeremy Joseph.[8]