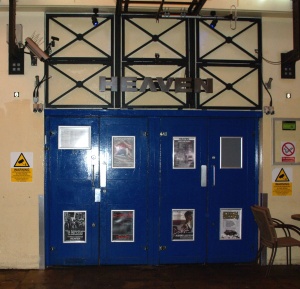 Stonewall (UK), the UK’s most prominent LGB charity, was conceived in the bar at Heaven.

Soundshaft is a self contained venue next to Heaven, which can operate as part of the main venue or by itself. It has a dance floor and bar area, with mezzanine balcony and lounge area above.[1]

When I came out to my mother in 1987 at the age of 19, my mother said “there are clubs for people like that, where they all have sex in the middle of the dance floor. Heaven? They should call it Hell!” I wasn’t so disappointed when I discovered this great club a couple of years later when I moved to London (I later found the clubs where people actually did have sex on the dance floor). I soon made friends with the door people, or they made friends with me, and would often let me in for free. I remember one guy saying that they would look after me – and he meant it in a very genuine way. I saw Leigh Bowery there one night, in a yellow outfit with a mask complete with beak with tassels. I would often catch the night bus home with Phillip Salon.