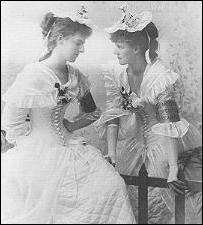 Eva Gore-Booth (right) with her sister Constance at the opening of Drumcliffe Creamery in 1895
Eva Selina Laura Gore-Booth (22 May 1870 – 30 June 1926) was an Irish poet and dramatist, and a committed suffragist, social worker and labour activist. She was born at Lissadell House, County Sligo, the younger sister of Constance Gore-Booth, later known as the Countess Markievicz.

Both she and Constance, who later became a prominent Irish revolutionary, reacted against their privileged background and devoted themselves to helping the poor and disadvantaged. In 1895, Eva became seriously ill with threatened tuberculosis. In the following year, while convalescing in Italy, she met and fell in love with Esther Roper at the villa of Scottish writer George MacDonald. Esther Roper was the daughter of Edward Roper, a factory hand who later became a Missionary, and Annie Roper the daughter of Irish immigrants. Esther identified as half Irish. By 1896 Esther had been secretary of the North of England Society for Women's Suffrage for four years.

Eva returned briefly to her home at Lissadell and established a Sligo branch of the Irish Women’s Suffrage and Local Government Association. Within months Eva rejected her privileged lifestyle and went to live in Manchester with Esther. They later became joint secretaries of the Women's Textile and Other Workers Representation Committee. In 1916 Eva and Esther established a radical journal entitled Urania, which expressed their pioneering views of gender and sexuality.

In the aftermath of the 1916 Rising she was instrumental in the campaign to secure the reprieve of her sister who had been sentenced to death for her involvement. Along with Alice Stopford Green she also took part in the unsuccessful campaign for the reprieve of Roger Casement.

Eva was also an accomplished poet. Her first published volume was highly praised by Yeats. After World War I, Eva and Esther became members of the Committee for the Abolition of Capital Punishment and worked for prison reform.

As she grew older, Eva was forced to give up active work but continued writing poetry. Esther took care of her throughout her long illness and they were together at the end. Eva died in 1926 at her home in Hampstead, London.

After Eva's death, Esther collected many of her poems for publication and wrote a biographical introduction to them. Esther was extremely reticent, and little is known of her final years. Constance wrote of her: "The more one knows her, the more one loves her, and I feel so glad Eva and she were together, and so thankful that her love was with Eva to the end."