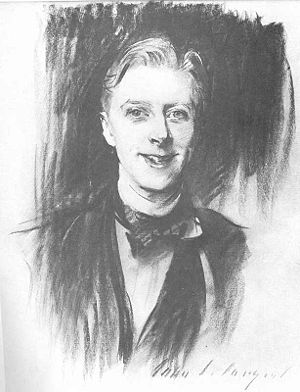 Ernest Thesiger (Ernest Frederic Graham Thesiger, 1879-1961) was an actor who worked on stage and in film, most famously as Dr Septimus Pretorius in The Bride of Frankenstein.

Ernest was the most colourful and flamboyant of the Thesiger family, which had until then produced lawyers, diplomats and an army officer. His parents intended Ernest to have a career in the civil service, but he wanted to be an artist, and was allowed to train at the Slade School of Fine Art, and for ten years he worked as an artist. He met there a fellow student, William Ranken, who became an intimate friend. He later married William’s sister, Janette, which so upset William that he shaved off his hair. Although Ernest made no effort to conceal his homosexuality, they remained married until his death; they had no children.

At the Slade he began to take part in amateur dramatics, and, realising he would never be a successful painter, he was soon acting professionally. He performed in many West End plays, including Shakespeare, but he was more comfortable in modern plays by dramatists such as Arnold Bennett, Somerset Maugham and George Bernard Shaw, who created several parts for him, including the Dauphin in Saint Joan. He appeared several times in drag, including as one of the witches in Macbeth, and in a Cochran revue. Thesiger is said to have asked Somerset Maugham why he never wrote any roles for him, and the reply was, ‘But I am always writing parts for you, Ernest. The trouble is that somebody called Gladys Cooper will insist on playing them’. He performed at the Edinburgh Festival, played Polonius in Hamlet in Moscow, and made a few appearances on Broadway, including as Jacques in As You Like It, with Katharine Hepburn as Rosalind.

Thesiger appeared in many films, including Olivier’s Henry V and The Man in the White Suit with Alec Guinness. His Hollywood career began in 1932 with a part in The Old Dark House with Charles Laughton, and he also appeared with Boris Karloff in The Ghoul, but his most famous role was Dr Septimus Pretorius, the mad and rather sinister scientist, in James Whale’s The Bride of Frankenstein.

He painted his toenails green, and wore a string of pearls round his neck, and would show them both off at dinner parties. He was also proficient in various handicrafts and interior decoration. His speciality was needlework and embroidery, and he wrote a book on the subject, Adventures in Embroidery. He would do his needlework in some unusual places, including theatre dressing rooms, film sets and, most remarkably, with Queen Mary at Buckingham Palace. Shortly before he died, he was awarded the OBE. He was buried in Brompton Cemetery, alongside his illustrious forebears.

As well as his own films, the 1998 film Gods & Monsters, about the last days of the film director, James Whale, includes Thesiger, who was played by Arthur Dignam, with Ian McKellen as Whale. There is a portrait of him in the National Portrait Gallery, by Sir Gerald Kelly.