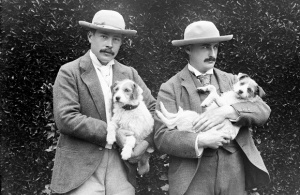 Ned Warren and John Marshall
Edward Perry Warren (1860–1928), known as Ned Warren, was a gay American art collector and writer, who made his home in England from 1888.

He received his BA from Harvard College in 1883 and later studied classical archeology at New College, Oxford.[1] At Oxford he met archeologist John Marshall (1862–1928), a younger man he called "Puppy,"[2] with whom he formed a close and long-lasting relationship, though Marshall married in 1907, much to Warren's dismay.[2] Beginning in 1888, Warren made England his primary home. He and Marshall lived together at Lewes House, a large residence in Lewes, East Sussex, where they became the center of a circle of like-minded men interested in art and antiquities who ate together in a dining room overlooked by Lucas Cranach's Adam and Eve, now in the Courtauld Institute. One account said that "Warren's attempts to produce a supposedly Greek and virile way of living into his Sussex home" produced "a comic mixture of apparently monastic severity (no tea or soft chairs allowed) and lavish living."[3]

Warren is best known as the owner of the Warren Cup, now in the British Museum.