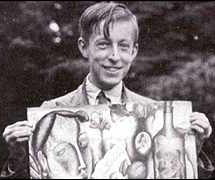 Edward Burra
Edward Burra (1905–1976) was a painter, draughtsman, and printmaker, best known for his depictions of the urban underworld, black culture and the Harlem scene of the 1930s.

Burra was born in South Kensington, and studied at Chelsea School of Art from 1921 to 1923 and the RCA from 1923 to 1924. He spent much of his life near Rye, East Sussex. Continuing ill health prevented him from receiving the education his parents had planned, but they encouraged his interests in drawing and painting with instruction from a local teacher. His parents encouaged him to adopt painting as a profession and provided financial support. 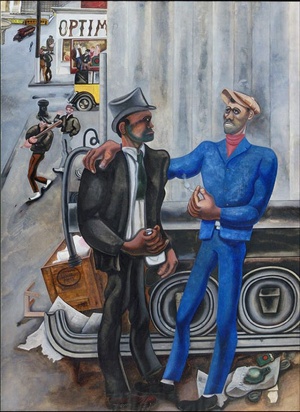 "Harlem Scene", 1934
Burra travelled regularly to Mediterranean France and Spain and later to Boston and New York. His work (which remained remarkably consistent in style over a long working life) included genre watercolours with a humorous touch, as well as more dramatic works influenced by El Greco and Goya. Notable are "Mexican Church" (1938) and "Soldiers" (1942), both in the Tate Gallery.

Burra was "probably gay (given his penchant for depicting male posteriors)."[1]

In his painting he used few overtly homosexual subjects, although his figures often convey the potential for sexual liaisons of various kinds. Burra was awarded a CBE in 1971, and died five years later in Hastings.

Partly based on a Koymasky article.