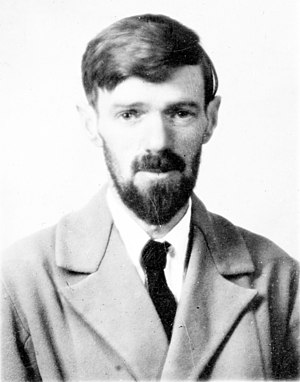 He is best known for his novels, including Sons and Lovers, The Rainbow, Women in Love, and Lady Chatterley's Lover.

Lawrence was born and educated in Nottinghamshire, qualifying as a teacher at University College Nottingham. He began writing while teaching at a school in Croydon, but became a full-time author in 1911.

in 1912 Lawrence met the German-born Frieda Weekley, the wife of his former professor at Nottingham. They eloped together to Germany and then Italy. Frieda obtained a divorce, and she and Lawrence were married in 1914. During the first world war, the Lawrences were harassed by the authorities because of her German nationality and his opposition to militarism. After the war they left England, and most of the rest of his life was spent travelling to Australia, Ceylon, the USA, Mexico, and the south of France.

Lawrence suffered from ill-health for much of his life, and died in Venice at the age of 44.

Lawrence's writings address in great detail the sexual and emotional relationships between his characters, in the context of industrialisation.

His novel The Rainbow was prosecuted for obscenity in 1915, and unavailable in Britain until 1926. Today however its descriptions of sexual activity seem very mild and restrained. Lady Chatterley's Lover is much more explicit, and was originally published with a number of cuts. In 1960 a full unexpurgated edition was published by Penguin Books, and prosecuted for obscenity. The ensuing trial at the Old Bailey heard evidence from a number of distinguished experts; the jury returned a verdict of Not Guilty, which is seen as a landmark in the relaxation of obscenity laws in the UK.

In 1929 a number of Lawrence's paintings were seized by the police in London as indecent. He got them back only by promising never to show them in England again.

While writing Women in Love in Cornwall during 1916–17, Lawrence developed a strong and possibly romantic relationship with a Cornish farmer named William Henry Hocking.[1] It is not absolutely clear whether their relationship was sexual, but Lawrence's wife, Frieda, said she believed it was. Lawrence's fascination with themes of homosexuality could also be related to his own sexual orientation. This theme is also overtly manifested in Women in Love. Indeed, in a letter written during 1913, he writes, "I should like to know why nearly every man that approaches greatness tends to homosexuality, whether he admits it or not..."[2] He is also quoted as saying, "I believe the nearest I've come to perfect love was with a young coal-miner when I was about 16."[3][4]

Chapter XII of The Rainbow depicts a lesbian relationship, and was particularly commented on during the 1915 obscenity trial. A representative of the publishers commented in court "He had since read one of the chapters, and regarded it as disgraceful. Three other people, however, had read the same chapter without being able to find anything suggestive in it. Sir John Dickinson. ... They cannot have read it very intelligently. It is headed "Shame"[5]