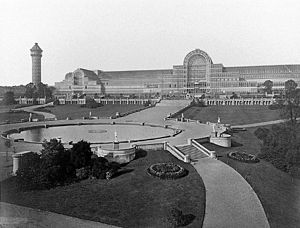 The Crystal Palace in 1854
Crystal Palace is an area of South London. It is named after the vast iron and glass building which was moved there in 1854 having previously housed the 1851 great exhibition, and was burned down in 1936. Four different London Boroughs meet at Crystal Palace - Bromley, Croydon, Lambeth and Southwark - and a fifth borough (Lewisham) is not far away. The part of Crystal Palace within the borough of Croydon is also known as Upper Norwood.

The Hollybush in the Crystal Palace Triangle was a gay pub in the 1990s.

Out for Sport organised a tournament at the National Sports Centre in 1999.

There was a local gay and lesbian group called Palace Pinks in the late 1990s.

The CAGS Tennis Group have been playing at the National Sports Centre since early 2012.