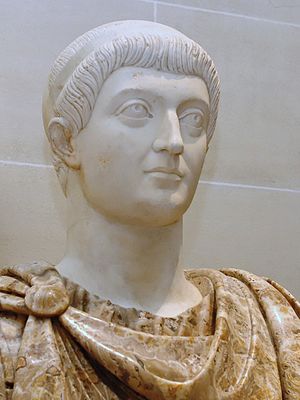 In 342, Constans and Constantius jointly decreed that "the law must be armed with an avenging sword" to rid the Empire of "those men who marry men as if they were women."[1]

In later years Constans lost the support of the legions, who were "offended by his homosexuality".[2]

"This condemnation of homosexuality challenges recent scholarly views of its acceptance in late antiquity. For further discusssion of this topic, see William A. Percy's review of Mark D. Jordan, The Invention of Sodomy in Christian Theology (Chicago, 1997) in The American Historical Review 103 (1998): 496-497. For a discussion of Constans' homosexual tendencies, see further DiMaio, Zonaras, 279ff."[3]

In 350, the general Magnentius declared himself Emperor and Constans was killed.