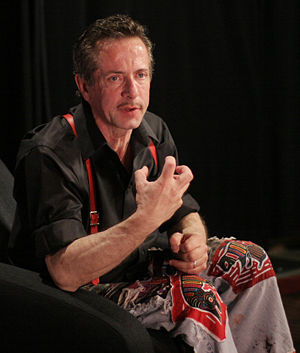 Clive Barker in 2007 at the EMP/Science Fiction Museum in Seattle
Clive Barker (born 1952) is a British author, now living in the USA.

Clive Barker is one of the biggest and most successful names in modern fantasy/horror fiction. His debut in the USA led master of horror Stephen King to proclaim: “I have seen the future of horror and its name is Clive Barker."[1]

Barker has been openly gay since giving a interview in Advocate magazine in the early 1990s.[2] Born in Liverpool, he now resides in Los Angeles with his parter David Armstrong, a photographer.

In 2003, Barker received The Davidson/Valentini Award at the 15th GLAAD Media Awards, presented "to an openly lesbian, gay, bisexual or transgender individual who has made a significant difference in promoting equal rights for any of those communities".[3]

Barker has also been involved in producing films, most notably Hellraiser and the gay-themed Gods and Monsters, for which Ian McKellen was nominated for an Academy Award. A lifelong fan of Marvel Comics, Barker created new superheroes for a Marvel imprint in the early 1990s.