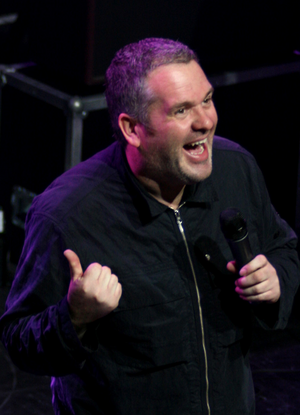 Chris Moyles in 2009
Chris Moyles (born in Leeds, 1974) is a radio and television presenter. He presented The Chris Moyles Show on BBC Radio 1 from 2004 to 2012, making it the longest-running breakfast show in the station's history.

In May 2006 Moyles was accused of homophobia, when he rejected a ringtone by saying "I don't want that one, it's gay", live on air. This led to a number of complaints to the BBC,[1] arguing that the use of the word gay in this context was homophobic. The BBC governors said that Moyles was simply keeping up with developments in English usage.[2]

The Programme Complaints Committee said that, "The word 'gay', in addition to being used to mean 'homosexual' or 'carefree', was often now used to mean 'lame' or 'rubbish'.[2] In describing a ringtone as gay, the DJ was conveying that he thought it was 'rubbish' rather than 'homosexual'. Moyles was not being homophobic."[1] The panel acknowledged, however, that this use of the word 'gay' in a derogatory sense could cause offence to some listeners and counselled caution on its use.[3]

Subsequently in June, Stonewall marched with placards during Europride in London demanding the dismissal of Moyles. According to Stonewall, "Chris Moyles is not helping young LGBT people struggling to come out through his comments."[4] Stonewall gave Moyles the award of "Stonewall Bully of the Year" at the 2006 Stonewall Awards.[5][6]

Those defending Moyles have noted that Aled Haydn Jones, his show's producer who has worked with Moyles since 2001, is openly gay.[7] He was quoted in The Guardian by Stonewall chief executive Ben Summerskill as saying "Yeah, I'm homophobic, I don't like the gays. Sorry, it just does my head in. We have a token gay on the show!"[8] In his book The Difficult Second Book, Moyles says that he was responding to another article with sarcasm, and was subsequently quoted out of context.

Moyles was censured by Ofcom following eight complaints made after a broadcast on 20 January 2009 in which he told listeners it was the birthday of Will Young and then went on to sing "Evergreen" and "Leave Right Now" in a high pitched and effeminate voice, changing the lyrics to references to Young's sexual orientation. Ofcom stated that the language used could have been "interpreted by listeners as promoting and condoning certain negative stereotypes based on sexual orientation" and whilst acknowledging the intention was to be humorous in their opinion it could have been perceived as hostile and pejorative. The media regulator also said in their view that because of the show's breakfast time slot that attracts a young audience it had the potential to encourage children to discriminate against others based on their actual or perceived sexual orientation and ran the risk of being imitated on the playground causing "unnecessary distress".[9]

Largely based on the Wikipedia article of the same name.