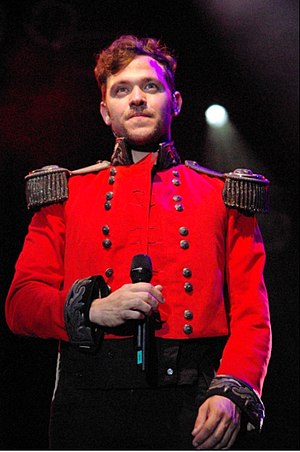 Will Young appearing at Rochester Castle Gardens on 15th July 2011
Will Young (born 1979) is a singer, song writer, and actor.

Will Young was born in Reading, and educated at the University of Exeter and the Arts Educational School, London. In 2002 he became the first winner of the Pop Idol televised talent contest. He has since made a number of best-selling records, and appeared as an actor on stage and on television.

In March 2002, Will Young revealed that he is gay, pre-empting a tabloid newspaper that was preparing to out him. He also stated that he had never hidden it and was comfortable with his sexuality.[1][2]

"With a new memoir, a recent No 1 album, a summer series of concerts, and rave reviews for his role in Cabaret, Young is riding high. Ten years on from his Pop Idol win, he has finally appeared in a video (for his single Jealousy) in which his love object is a man."