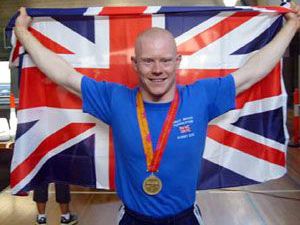 Following a break from competing in 2007 due to illness Chris returned in the 82.5 kg Open class, this time mainly competing in the World Drug-Free Powerlifting, single event championships. He has since won Silver in Antwerp 2008 (Squat), Gold (senior) in Antwerp 2008 (Deadlift), Gold in Bradford 2009 (Deadlift), Bronze in Milton Keynes 2009 (Powerlifting), Gold in Moscow 2010 (Deadlift).[1]

Chris Morgan qualified as an International referee in 2009 and has officiated at the World Championships in Bradford 2009, Milton Keynes 2009, Moscow 2010 and Glasgow 2011. He is currently the Coaching Secretary of the British Drug Free Powerlifting Association.

Chris Morgan supports a number of charities and sports organisations. In 2004 he became a global Ambassador to the Federation of Gay Games[3] the organisation that gave him the confidence and motivation to be an openly gay athlete.

Chris dedicated his first World Championship Gold Medal in 2005 to the memory of Matthew Shepard.

Chris helped to launch LGBT History Month 2012, which was focused on sports.

Chris Morgan supports the Justin Campaign against homophobia in football. He dedicated his first Gay Games Gold medal to the memory of Justin Fashanu and has written a short tribute to Justin Fashanu[4] and recorded a short video message for the Football v Homophobia Campaign.[5]

He has signed the UK Government's charter for action to tackle homophobia and transphobia in sport.