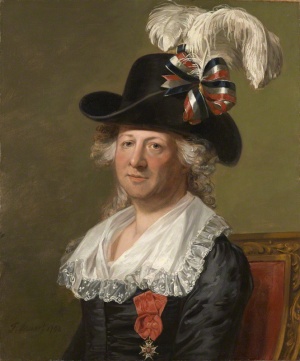 Portrait of d'Éon by Thomas Stewart, purchased by the National Portrait Gallery in 2012
Charles-Geneviève-Louis-Auguste-André-Timothée d'Éon de Beaumont (1728–1810), known as the Chevalier d'Éon, was a French ambassador, spy and soldier, who lived for 49 years as a man, and then for 33 years as a woman.

During the reign of Louis XV, d'Éon acted as a special agent for the king, in both Russia and England, without the knowledge of the French Government. From 1766 onwards he lived in exile in London, where bets were laid as to whether he was a man or a woman. In 1777 he was allowed to return to France, but the new king, Louis XVI, stipulated that he should dress as a woman (which he had been claiming to be) and paid for a new wardrobe.

In 1785 d'Éon returned to England, where she gave demonstrations of fencing (always dressed as a woman) but eventually died in poverty (having lost her pension after the French Revolution). She was found after her death to be physically male, although she claimed to have been born female and raised as a boy.

In 2012 the National Portrait Gallery purchased a portrait of d'Éon, which had previously been thought to be of an unknown lady.[1]

d'Éon is commemorated in the name of the Beaumont Society.