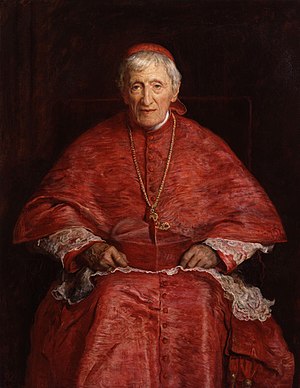 Newman in 1881, by Millais
John Henry Newman (1801–1890) was an Anglican priest who converted to Roman Catholicism and was made Cardinal. He wrote a number of theological books, and a defence of his life, Apologia pro Vita Sua.

He was born in the City of London, went to school in Ealing, and studied at Trinity College, Oxford.

From Anglican to Roman Catholic

In the 1830s, as Vicar of St Mary's, Oxford, and Fellow of Oriel College, Newman was one of the leaders of the Oxford Movement, which sought to emphasise the Catholic aspects of the Church of England. However he began to feel uncomfortable within the Anglican Church, and in 1845 he was received into the Roman Catholic Church, which caused a break with many of his family and friends and exile from his beloved Oxford. The next year he was ordained as a Catholic priest.

From 1854 to 1858 he was Rector of the new Catholic University of Ireland, now University College, Dublin.

In 1878 he was made a Cardinal by the pope - an unusual appointment for someone who was not even a bishop.

Newman was celibate throughout his life, but had a very deep friendship with Ambrose St John, who had joined the Catholic church at about the same time as Newman. When Fr St John died, Newman wrote: "I have ever thought no bereavement was equal to that of a husband's or a wife's, but I feel it difficult to believe that any can be greater, or any one's sorrow, greater than mine."[1]

At Newman's death, he was buried next to Fr St John, following his own request: "I wish, with all my heart, to be buried in Fr Ambrose St John's grave—and I give this as my last, my imperative will."[2]

In more recent years there has been a movement to canonise Newman as a saint. As the first step in this process, he was beatified in 2010. In connection with the proposed canonisation, there was a move to remove Newman's remains to a tomb in Birmingham Oratory, which would have been more convenient for those wishing to visit his relics when he became a saint. This was criticised, for instance by Peter Tatchell, but when the grave was opened, no traces remained of his body.

As "Blessed John Henry Newman", his feast day is observed on the 9th of October by the Personal Ordinariate of Our Lady of Walsingham (the body set up to cater for former Anglicans who had transferred to the Roman Catholic Church).[3]