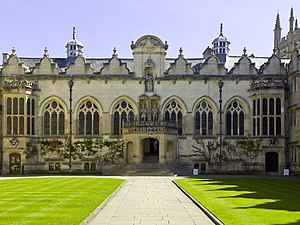 The front quad, with the hall and chapel
Oriel College, Oxford is one of the constituent colleges of the University of Oxford.

It was founded in 1326 by King Edward II, following an earlier foundation by Adam de Brome.

The college received a major legacy from Cecil Rhodes, whose statue appears prominently on the High Street frontage. During 2015 there was a campaign to have the statue removed, but the College after due consideration, decided to leave it in place, while seeking "to provide a clear historical context to explain why it is there".[1]