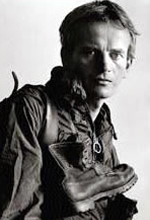 Bruce Chatwin
Bruce Chatwin (Charles Bruce Chatwin 1940–1989) was a novelist and travel writer. He won the James Tait Black Memorial Prize for his novel On the Black Hill (1982). Married and bisexual, he was one of the first prominent men in Britain known to have contracted HIV and died of AIDS, although he hid the facts of his illness.

Bruce Chatwin was born in Sheffield, and his first home was his grandparents' house in Dronfield, North East Derbyshire. He was educated at Marlborough College, Wiltshire, and then went to work at the Sotheby's auction house, starting as a porter, but later became an expert on Impressionist art and eventually a director of the company.[1]

In 1964 he began to suffer from problems with his sight, which he attributed to the close analysis of artwork entailed by his job. He consulted eye specialist Patrick Trevor-Roper, who diagnosed a latent squint and recommended that Chatwin take a six-month break from his work at Sotheby's. Trevor-Roper had been involved in the design of an eye hospital in Addis Ababa, and suggested Chatwin visit east Africa. In February 1965, Chatwin left for Sudan. On his return, he quickly became disenchanted with the art world, and turned his interest to archaeology. In 1966 he resigned from his Sotheby's post and enrolled at the University of Edinburgh to study archaeology. Despite winning the Wardrop Prize for the best first year's work, he found the rigour of academic archaeology tiresome. He spent only two years there and left without taking a degree.