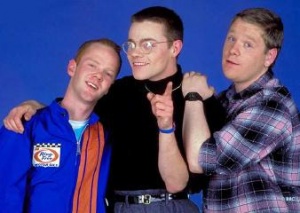 Left to right: Somerville, Steinbachek, Bronski
Bronski Beat were a gay pop trio who achieved success in the 1980s. Their best-selling album was Age of Consent.

The original line-up in 1983 was singer Jimmy Somerville backed by Steve Bronski and Larry Steinbachek. In May 1985 Somerville left the band [1].and was replaced by John (Jon-Jon) Foster. Later members were Jonathan Hellyer and Richard Coles.

The group's first single was "Smalltown Boy" which had a theme (more explicit in the video) of parental rejection and homophobia. This song was also included on the album Age of Consent.

Material from the Wikipedia article of the same name.