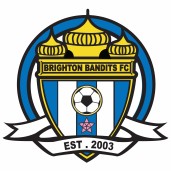 It first came together in 1997 when a group of members of the Gay Football Supporters Network (GFSN) decided to put together a scratch five-a-side team (the Brighton Belle-endes) and enter the GFSN National Five-a-Side Tournament in Blackpool.

The club attracted shirt sponsorship from the Amsterdam Hotel and, in 2002, a grant from The Scarman Trust. This allowed for the formation of the newly named Brighton Bandits in 2003. Further funding towards the running costs of the club from Brighton Pride followed in 2004 and GScene Magazine became the club's Media Sponsor in 2008.

The club entered the GFSN National League for the first time in 2003, finishing third overall.

In 2005/6 the club won the GFSN National League], winning 1-0 away to Village Manchester FC to clinch the title. In 2007 the club hosted a national 5-a-side tournament, eventually going on to win.

Whilst the trophy cupboard may have been a little bare of recent years, the club has been undergoing a period of rebuilding and is (January 2011) top of the GFSN national division 2. The club and its members have also been busy off the pitch, such as winning the 2010 BLAGGS/Winter Pride ten-pin bowling tournament, players taking part in the Gay Games in Cologne.

Brighton also won a national poll to hosting this years prestigious GFSN Summer Get Together over the weekend of 3rd to 5th June. The event saw over 250 players and supporters from 32 teams across the UK.

Brighton played four teams: two got into the semis and one in the quarter finals (well done to Stonewall FC 1st team for winning and Stonewall FC 3rd team for picking up a vase) A huge big thank you to Elliot Toms for his hard work in arranging the Brighton end of this event!