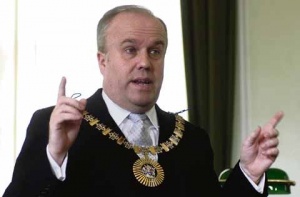 Brian Coleman
Brian Coleman (born 1961) is a former Conservative politician. He has been a councillor in the London Borough of Barnet since 1998, now sitting as an Independent, and was Mayor of Barnet in 2009–10.

In 2000 he was one of the first LGBT people to be elected to the London Assembly. In 2008 he was appointed Chair of the London Fire and Emergency Authority.

In 2009 he was listed at number 39 in the Pink News list of 50 most powerful gay, lesbian and bisexual people in British politics. The citation said:

"The cab bills, the “bling bling” chain of office, the outrageous claims about former PM Ted Heath – Brian Coleman is, as the saying goes, a “colourful” character. In June last year he accepted an honorary degree from Middlesex University. They overlooked the fact he had branded the institution “crap” in 2004."[1]

In 2007 in a blog in the New Statesman Coleman wrote: "The late Ted Heath managed to obtain the highest office of state after he was supposedly advised to cease his cottaging activities in the 1950s when he became a privy councillor" implying that Heath used to have casual gay sex in public lavatories.[2] The blog was written about in both the tabloid and mainstream press, but there was no confirmation of cottaging or of Heath having been warned.[3] The claims were denied by MP Sir Peter Tapsell, and Heath's friend and MP Derek Conway stated that "if there was some secret, I'm sure it would be out by now".[4][5]

Brian Coleman stood for re-election to the London Assembly in 2012, but was defeated. Later that year he was arrested for assault following an incident in North Finchley. He pleaded guilty and was expelled from the Conservative party, but continues to sit as a local councillor.