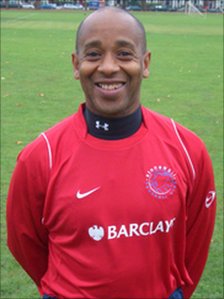 Aslie Pitter
Aslie Pitter (born 1960) is a footballer, and founder of Stonewall FC.

Aslie Pitter grew up in Balham, the son of Jamaican immigrants. He played football for a number of amateur clubs, but while playing for a team called Clapham Old Boys he received racial abuse form other players, and was demoted from the first team to the fourth team when a team-mate found out that he was gay.[1][2]

In 1991 he saw a listing in Time Out and joined other gay men playing football in Regent's Park. This developed into Stonewall FC, the UK's first gay football club.

Aslie works as an assistant manager of a branch of Boots and lives in Balham with his partner Alan; they plan to have a civil partnership.

In 2011 Aslie Pitter recived an MBE for his work in combating homophobia,[3][4] and an honorary doctorate from the University of East London.[5]