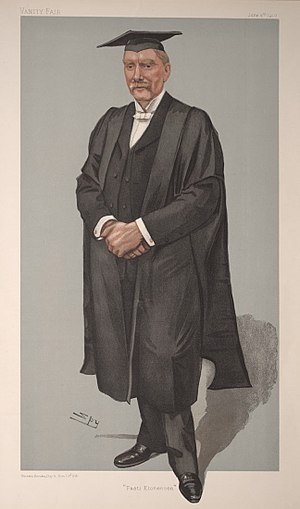 Caricature of Benson in Vanity Fair
A C Benson (Arthur Christopher Benson, 1862–1925) was an essayist and poet, and Master of Magdalene College, Cambridge. He wrote the words to "Land of Hope and Glory".

Benson was one of the six children of Edward White Benson, Archbishop of Canterbury; the other children included the writers E F Benson and R H Benson and the Egyptologist Margaret Benson. He was educated at Eton (where he later taught) and King's College, Cambridge. He lectured at Magdalene College, Cambridge, later becoming its Master, and he was also a Governor of Gresham's School.

Like his brothers and sisters, Benson never married. He is thought to have been homosexual. He left 180 volumes of diaries, not all of which have been published.[1]