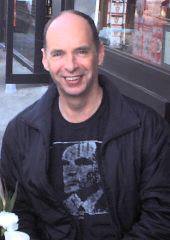 Andrew Hodges
Andrew Hodges (born 1949) is a mathematician, author and a pioneer of the gay liberation movement of the 1970s.

Since 1972, Hodges has focused his research activities on twistor theory — the new approach to the problems of fundamental physics pioneered by the mathematician Roger Penrose.

Hodges is perhaps best known as the author of Alan Turing: The Enigma, the story of the British computer pioneer and codebreaker Alan Turing.[1] The book was chosen by Michael Holroyd as part of a list of 50 'essential' books (that were currently available in print) in The Guardian, 1 June 2002.[2] He is also the author of works that popularize science and mathematics.

He is a Tutorial Fellow in mathematics at Wadham College, Oxford.[3] Having taught at Wadham since 1986, Hodges was elected a Fellow in 2007, and was appointed Dean from start of the 2011/2012 academic year.

In 2012 he delivered the Oxford University LGBT Lecture.