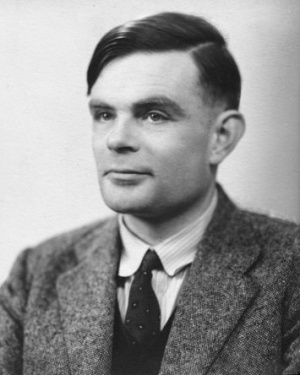 Alan Turing in 1951
Alan Turing (1912–1954) was an English mathematician and founder of the science of computing, who did very important cryptographic work during World War 2, but was later prosecuted for homosexual acts, leading to his apparent suicide.

During the second world war he had a leading role in the effort at Bletchley Park to break the German ciphers, including development work which led to the construction of what was effectively the world's first computer. The work of Bletchley Park remained secret for many years after the war, but is now recognised as having had a crucial role in the British war effort.

After the war, he worked on computer design at the National Physical Laboratory in Surrey, and subsequently, at the Victoria University of Manchester, on artificial intelligence.

Turing was a noted amateur athlete, running with the Walton Athletic Club while working at the NPL, and but for illness might have competed in the 1948 Olympic Games.

Around December 1951 he met 18 year old Arnold Murray in the Oxford Road area of Manchester. Murray spent the night with him at his house. Later Murray helped an accomplice break into the house. Turing reported the crime to the police, who were however more interested in his relationship with Murray. Both were charged with gross indecency under Section 11 of the Criminal Law Amendment Act 1885. Turing was given a choice between imprisonment and probation accompanied by hormonal treatment equivalent to "chemical castration". His security clearance was revoked, which meant he was no longer allowed to work on secret Government cryptographic work, even though he had worked during the war on matters of the highest importance and utmost secrecy.

In June 1954 he may have committed suicide apparently by eating an apple containing cyanide. Although the inquest verdict was suicide this was not accepted by many and doubt still exists about the verdict.

Turing was unknown as a gay icon until he was first mentioned in a leaflet published in 1974 by Gay Left [1].

In 1999, Time Magazine included Turing in its 100 Most Important People of the 20th Century.

In 2009 the British Government issued an apology for the way Turing had been treated.

In 2011 an e-petition was raised asking for Turing to be officially pardoned. He received a posthumous royal pardon on 24 December 2013.

In July 2019 it was announced that Turing would feature on the next design of the £50 sterling note.