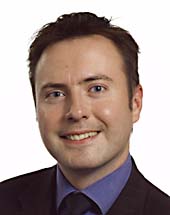 Alyn Smith
Alyn Smith (born 1973) is an SNP politician and MEP for Scotland.

He was born in Glasgow and grew up in Scotland and Saudi Arabia.

He returned to Scotland in 1986, studied European Law at Leeds University and spent a year studying in Germany.

He graduated from Nottingham Law School in 1996, and gained a Master's degree in European Studies from the College of Europe in Natolin. He also for one year taught English in India and worked with Scotland Europa in Brussels.

Smith later moved to London where he qualified as a lawyer with commercial law firm Clifford Chance.

Prior to his election he worked on the SNP staff in Holyrood.

Smithy is openly gay and lives in Edinburgh.[1]