From LGBT Archive
(Redirected from William of Longchamp)
Jump to: navigation, search 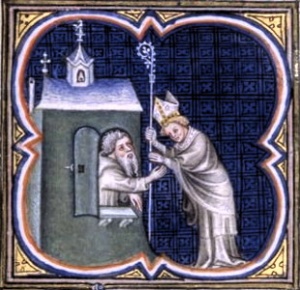 William was born in Normandy, and became Chancellor of the Duchy of Aquitaine, under Richard, Duke of Aquitaine, son of King Henry II. Richard succeeded his father in 1189, as King Richard I, and William was soon appointed Chancellor of England (paying £3,000 for the appointment) and Bishop of Ely. Richard left England later that year, appointing William Justiciar, which meant he could rule in the King's name. William's rule was unpopular, partly because he was seen as a foreigner and did not speak English, and in 1191 he was put on trial in his absence and deposed from his offices. He attempted to leave England in various disguises, including a monk's habit and women's clothes. Hugh Nonant wrote that Longchamp attempted on one occasion to hide dressed as a prostitute, which led to him being assaulted by a fisherman who mistook him for a whore. He eventually managed to leave England, and went to the court of the Holy Roman Emperor, who was holding King Richard captive. He took part in the negotiations to free Richard on payment of a ransom of 100,000 marks (about £67,000) and briefly returned to England with the King. When Richard left the country again, in 1197, William went with him, and never came back to England.

Of Longchamp's homosexuality, Giraldus Cambrensis claims that “the more outrageous the sexual act, the more he liked it; that he made homosexuality so common that heterosexuals were ridiculed at court - “If you don't do what courtiers do, what are you doing in court?”; that a woman brought her daughter to him dressed as and trained to imitate a young man, but when the bishop undressed her and found she was a girl he would not touch her (“although she was very beautiful and ripe for the pleasures of the marriage bed,”); and that his homosexuality was so great that even descendants of his family were suspected of homosexuality".[1]

Boswell warns that Giraldus' claims are so exaggerated, they may be based on little more than the standard English animus against the French overlords - but also notes that unlike other English diatribes against the invaders, his complaints against Longchamps are not about general sexual depravity, but concerned only with homosexuality. It is also important to note that male sexual relationships appear to have been commonplace at the court of the bisexual King Richard I.