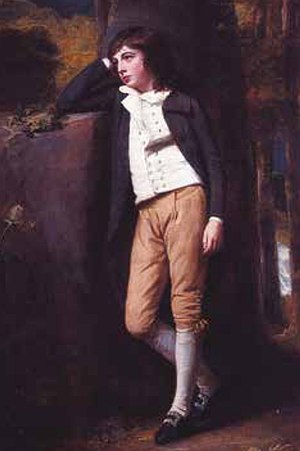 Courtenay was baptized on 30 August 1768, the fourth of 14 children (his siblings all being girls) [1] and was known as "Kitty" to family and friends. As a youth, "Kitty" Courtenay was sometimes described as the most beautiful boy in England.[1] On his father's death in 1788 he became The 3rd Viscount Courtenay of Powderham. With his new title and wealth, the young Lord Courtenay led an excessively flamboyant lifestyle.

Courtenay became infamous for his affair with the extremely wealthy art collector and sugar plantation owner William Beckford. In the autumn of 1784, a house guest overheard an argument between Courtenay and Beckford over a note which Courtenay had. There is no record of what the note said, but the house guest said that Beckford's response on reading it was that he entered Courtenay's room and "horsewhipped him, which created a noise, and the door being opened, Courtenay was discovered in his shirt, and Beckford in some posture or other — Strange story."[1] Beckford was subsequently hounded out of polite British society when his letters to Courtenay were intercepted by Courtenay's uncle Lord Loughborough, who then publicised the affair in the newspapers.[2] Courtenay was forced to live abroad, and lived in the United States where he owned a property on the Hudson River, and later in Paris.

Courtenay did not marry, and fathered no known children. In 1831 he successfully petitioned to revive the title of Earl of Devon for the head of the Courtenay family, that title having been dormant since 1556, and so became the 9th Earl. He died on 26 May 1835 in Paris from natural causes. He was loved by his tenants, who insisted that he be buried in stately fashion. He was buried on 12 June 1835 at the family seat Powderham Castle near Exeter (still owned by the Courtenay family).