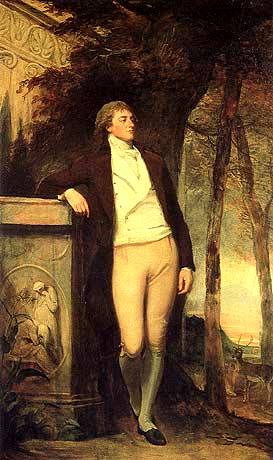 William Beckford in 1782, painted by George Romney
William Thomas Beckford (1760–1844) was a novelist, art collector, and politician. He is particularly remembered for his Gothic novel Vathek (1786) and for his architectural follies, including Fonthill Abbey.

Beckford was bisexual. He married and had two daughters, but had an affair lasting several years with William "Kitty" Courtenay. In the autumn of 1784, a house guest overheard an argument between Courtenay and Beckford over a note which Courtenay had. There is no record of what the note said, but the house guest said that Beckford's response on reading it was that he entered Courtenay's room and "horsewhipped him, which created a noise, and the door being opened, Courtenay was discovered in his shirt, and Beckford in some posture or other — Strange story."[1] Beckford was subsequently hounded out of polite British society when his letters to Courtenay were intercepted by Courtenay's uncle Lord Loughborough, who then publicised the affair in the newspapers.[2] Beckford then fled with his wife to the continent.

He later returned to England but lived in seclusion. From 1796 onwards he had a vast gothic house, Fonthill Abbey, constructed on his inherited lands at Fonthill Gifford, Wiltshire. The Abbey was poorly constructed: the tower collapsed three times and was rebuilt twice, and most of the house has since been demolished. Beckford also accumulated an important art collection, and wrote music, having briefly studied with W A Mozart.

He is buried in Bath, near another of his architectural follies, Beckford's Tower on Lansdown Hill.