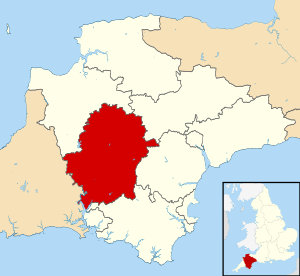 West Devon shown within Devon
West Devon is a local government district in Devon. Towns in the district include Okehampton and Tavistock.

In the 19th century Mary Mudge lived in Milton Abbot and died in Tavistock.

In 2012 Out in Tavi was set up as a group for LGBT people in Tavistock and the surrounding area.[2]

In 2013 the Tavistock Centre for Couple Relationships (TCCR) was been awarded an eQuality chartermark by PACE for its work with LGBT couples.[3]