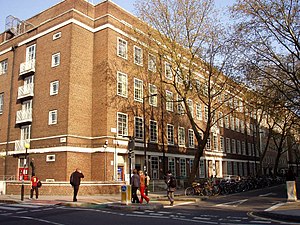 The ULU building
The University of London Union (commonly referred to as ULU, pron. 'yoo-loo'), founded in 1921, is the students' union for the University of London. In 1957 it moved into its current seven-floor building in Malet Street, Bloomsbury. Its facilities include a large swimming pool.

Gay London Swimmers used to have nude swimming sessions there.

At one time the Dolphin Swimming Club was based there.

In 2012 ULU launched a campaigning and social network for liberation groups in London. All LGBT, Women, Disabled, Mature, Palestinian and Black student groups, as well as other student campaigners, were invited.[6]