From LGBT Archive
(Redirected from The Hoist)
Jump to: navigation, search 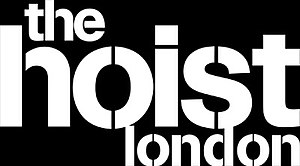 The Hoist logo
The Hoist is a club in Vauxhall, London. Together with The Backstreet in Mile End, it is one of two leather clubs in London. It caters for men who are into the fetish and leather/rubber scene.

The dress code, which is strictly enforced, consists of leather, uniform, rubber, industrial, skinhead, full sports kit and finally boots and jocks. The dress code applies to all nights, except where specifically stated, the doorman's decision is final. In addition to the dress code above, patrons must also wear boots. Trainers, sports shoes or shoes of any other kind are not acceptable unless, specifically stated or you are attending 'SBN' (stark bollock naked) or 'NBN' (near bollock naked). There are a limited number of boots avilable at the coat-check. The Hoist has a boot-shine boy on duty on Saturdays.

The Hoist opened around 1998, and is a venue that holds one of the main Fetish Week London parties. On the last week of January The Hoist holds its annual Mr Hoist contest, part of an international Mr Leather competition.