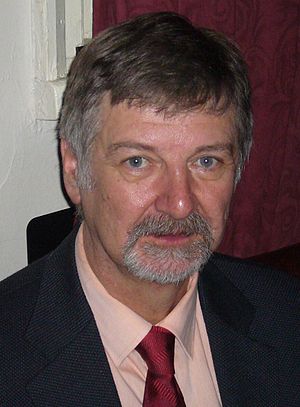 Born to a mining family in a South Yorkshire village, Sanderson came out as gay after starting work in Rotherham at the age of seventeen. His parents found out after reading an interview with Sanderson in a local newspaper, concerning his booking a venue for a meeting of the Campaign for Homosexual Equality. Moving to London in the early 1970s, Sanderson worked as a counsellor and psychiatric nurse, and on the problem page of Woman's Own.

Sanderson began campaigning for gay rights in 1969. His "MediaWatch" columns for Gay Times have been a feature since 1982, and were described as "probably the most informative record of the extent of press homophobia in the UK in the 1980s". In 1986, after experiencing problems with a Christian-owned publisher, Sanderson established The Other Way Press as a specifically gay-themed publishing house. Sanderson has been accused of being an atheist, who hates religion and confuses atheism with secularism. Sanderson was elected President of the National Secular Society in 2006, having previously served as a vice-president for a number of years. He helped organise protests during Pope Benedict XVI's visit to the United Kingdom.

Sanderson's partner is Keith Porteous Wood, the executive director of the National Secular Society. They had been together for over two decades before civil partnerships were introduced in 2005, and they entered into a civil partnership in 2006.