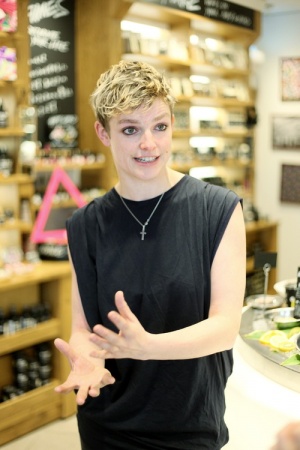 Tamsin Ormond
Tamsin Omond (born 19 November 1984)[1] is an author, environmental activist and journalist. She has campaigned for the Government to take action to avoid man-made climate change.

Having completed her secondary education at Westminster School, Omond graduated from Trinity College, Cambridge, and also has an MA in Ecology and Social Justice from the Open University. When she first left college she had intentions of being a major theologian, including aspirations of becoming the first female Archbishop of Canterbury.[2] She is the granddaughter of Sir Thomas Lees, a baronet.[3][4]

In 2009, she published her first book, Rush - The Making of a Climate Activist.[5] Omond has written articles about Christianity, climate change and human rights. She has been published in the Church Times, The Ecologist, The Guardian, The Evening Standard and The Mail on Sunday.[6]

Omond originally campaigned as a member of the activist group Plane Stupid, although she has stated that she is no longer active with the group.[7] Omond is a founding member of the activist group Climate Rush.[8] She has organised a number of high profile protests including scaling the roof of the House of Commons to protest against aviation, for which she was arrested and bailed on the condition that she did not enter Parliament. In October 2008, she breached this condition by organizing a 500 person "rush" on Parliament.[3] This led to her being re-arrested and threatened with imprisonment due to her breach of bail. Instead she was then bailed with a strengthening of her bail conditions to ban her from going within one kilometre of Parliament.[8]

Omond has also organised protests against the Expansion of London Heathrow Airport. In May 2008, she said that she would be prepared to be imprisoned for life for her cause.[9][10][11]

Omond claims that her activism has been inspired by the Suffragettes, who had campaigned using direct action for Women's suffrage at the beginning of the 20th Century. An independent film has been made about Omond's connection to the campaigning techniques of the women's suffrage movement. Omond dressed as a suffragette for an anti-car protest targeting Jeremy Clarkson.[12]

Omond stood in the 2010 General election in the newly created Hampstead and Kilburn constituency. She has created a new independent party, "The Commons". They plan to engage young people in voting and promote sustainability in the local area.[13] It was also praised by commentator Giles Coren.[14] She received 123 votes (0.2% of total votes cast).[15]

Omond was placed in 56th place in the Independent on Sunday's Pink List 2009.[19] She was included under "Lifetime Achievement Awards" in the Pink List 2011.