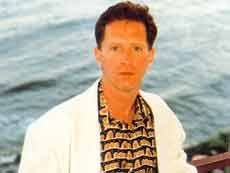 He was born in Manchester in 1949, studied Fine Art at Hornsey and Newport colleges of Art and did an MA teaching fellowship in New Music Composition and Ethnomusicology at Wesleyan University, USA.[1]

His videos and writings were amongst the first to explore the relationship between video, television and the media. With later works such as Bright Eyes, he explored, and challenged, misrepresentations of homosexuality during the AIDS epidemic of the 1980s, at a time when lesbian and gay lifestyles and sexuality were under attack as a result of Clause 28 and the media-encouraged prejudice surrounding the spread of AIDS. Towards the end of his life he made a number of Channel 4 commissioned documentaries concerning gay identity and he continued to be a passionate campaigner for gay rights.[1]

He died in London on 31 May 1993, aged 44, after being taken ill with an Aids-related illness while on the West Coast of the USA researching a film for Channel 4’s Critical Eye series.[2]

"Stuart Marshall was an exceptionally gifted artist and teacher. His creativity was expressed through many forms: avant-garde music, video, performance and installation art as well as film. He was also a gay man with unstinting political commitment to supporting lesbian and gay lives through his work."[3]