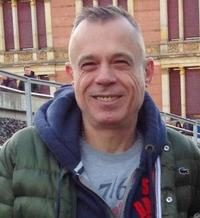 He was born in Orpington, the son of a banker, and brother to his older sister Jane. He is extremely proud to be able to trace his roots back 250 years in London and is three quarters cockney. His mother's families originated from Whitechapel where they had emigrated from Germany in the 1860s. He believes that this ancestry informs his determination to succeed, the fear of falling back into poverty in-grained from the cradle by his mother. It also informs his passionate view on immigration being a wonderful positive thing, without it he would not exist. It creates so many amazing human possibilities.

He had a fairly normal childhood although at an early age was aware that he was different from other boys and then an extremely traumatic and troubled coming out in the repressive atmosphere of the suburbs in the 1970s. He remains angry that the support available at the time from the medical, counselling and psychiatric establishment was at best non-existent and more often blatantly cruel, homophobic and repressive. Stevie’s later life has been influenced and shaped by that trauma although he is insistent that ultimately this became only a positive influence as it informs his ultra-liberal views, and total insistence on equalities in all their forms, and also feels that it developed his breadth and depth, being a key step on his spiritual journey.

His experience’s are mirrored in the story of Charlie in his first novel The Lost Boy the Doodlebug and the mysterious number 80,[1] although the fictional narrative is totally different from what happened in reality.

Later he fled the suburbs and immersed himself in the heady gay scene of 1970s Earls Court, all disco glitter balls and clones. He lost most of his friends in the early 1980s to AIDS and considers himself blessed by the universe that he survived. Later he rode the big white wave that was the explosion of House music in the second summer of love in 1989, and was often found in latter years dancing on a podium in Chemistry, Trade or Heaven.

His beloved life partner is Neil Ellis. They met in 1990 during the clubbing years and this time is very dear to them both. He says that the reason that they have stayed together for so long is that they love each other unconditionally. They had a civil partnership on the day the law changed in 2005, partly as a political statement. They have a loving blood family and acquired family who bring great support and joy to their lives.

Stevie is also Finance director of Planarama ltd, a design company specialising in retail window display, set up by Neil in 1999.[2] At night he is sometimes found DJing as DJ Turbojet;[3] he is passionate about music, particular House. He is also a total gay-geek and loves planes, trains, is a serious Doctor Who fan, and is WW2 researcher with a web site detailing V1 and V2 attacks on South London.[4] He adores cats and had been adopted as guardian by his beloved Max, a black and white moggie.[5]

Stevie is deeply spiritual and believes passionately that in some manner or another beyond this life he will be re-born again and again and his soul refined until finally he reaches the state of being part of the infinite. His writing reflects these beliefs and he is supported by them during his more troubled times.