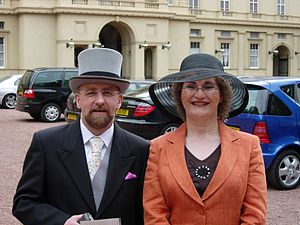 Stephen Whittle (left) and Christine Burns at Buckingham Palace
Stephen Whittle (Stephen Thomas Whittle, born 1955) is a United Kingdom activist with the transactivist organization Press for Change.[1] Since 2007, he has been professor of Equalities Law in the School of Law at Manchester Metropolitan University.[2] Between 2007 and 2009, he was president of the World Professional Association for Transgender Health (WPATH).[3] An FTM transsexual, he is described as "a radical lesbian before his sex change and now a leading commentator on gender issues",[4]

In 1992, along with Mark Rees, the actress Myka Scott and an airline pilot Krystyna Sheffield, he founded and became vice-president of Press for Change that works to change the laws and social attitudes surrounding transgender and transsexual lives.

After the Gender Recognition Act 2004 came into force in April 2005, he achieved legal recognition as man and so was able to marry his female partner.[5]

He has written many books and articles on trans issues.

In the 2005 New Year Honours he received an OBE for "services to Gender Issues".[6]

He was listed under "Lifetime Achievement Awards" in the Pink List 2011.