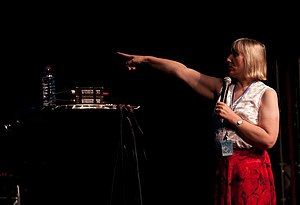 Sophie Wilson giving a presentation
Sophie Wilson (born 1957) is a British computer scientist. She is known for designing the Acorn Micro-Computer, the first of a long line of computers sold by Acorn Computers Ltd, as well as the instruction set of the highly successful ARM processor.

Wilson was educated at Selwyn College, Cambridge. In 1978, she designed the Acorn Micro-Computer, the first of a long line of computers sold by Acorn Computers Ltd. In 1981, Wilson extended the Acorn Atom's BASIC programming language dialect into an improved version for the Acorn Proton, a microcomputer that enabled Acorn to win the contract with the British Broadcasting Corporation (BBC) for their ambitious computer education project, whereupon the Proton became the BBC Micro and its BASIC was developed into BBC BASIC. In 1983, she designed the instruction set for one of the first RISC processors, the Acorn RISC Machine (ARM), later to become one of the most successful IP-cores (i.e., a licenced CPU core) of the 1990s and 2000s.

Wilson designed Acorn Replay, the video architecture for Acorn machines. This included the operating system extensions for video access as well as the codecs themselves, optimised to run high frame rate video on ARM CPUs from the ARM 2 onwards.

Wilson was a member of the board of the technology and games company Eidos plc, which bought and created Eidos Interactive, for the years following its flotation in 1990, and was a consultant to ARM Ltd when it was split off from Acorn in 1990.

Wilson is transsexual and was born Roger Wilson.[1] In the BBC television drama Micro Men a young Roger Wilson is played by Stefan Butler and Wilson herself makes a cameo appearance as a pub landlady.[2]