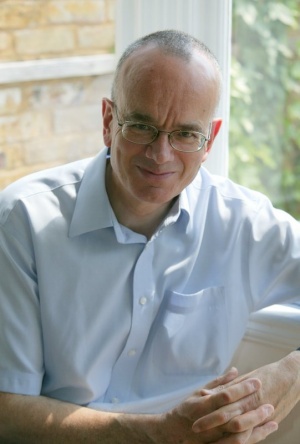 Sir Stephen Wall
Sir Stephen Wall GCMG, LVO (born 1947 in Croydon, Surrey) is a retired diplomat, and a trustee of Kaleidoscope, a charity campaigning for LGBT rights, especially in the Commonwealth. He was formerly LGBT Equality Champion at University College London.

He was educated at Selwyn College, Cambridge, and entered the Diplomatic Service in 1968.[1] His early postings included the United Nations, Addis Ababa and Paris.[1] On his return to London in 1974, he worked in the Foreign Office News Department and was later seconded to the press office of James Callaghan, who was then Prime Minister.[2] He subsequently served as Assistant Private Secretary to David Owen, the Foreign Secretary.[1]

Wall was sent as Ambassador to Portugal in 1993, and he remained there until 1995, when he was named as Britain's Permanent Representative to the European Union.[3] He returned to London in 2000 to take charge of the Cabinet Office's European Secretariat. He remained in that post until 2004, and during that period he was EU adviser to Tony Blair.[3]

He was principal adviser to Cormac Murphy-O'Connor, the Roman Catholic Archbishop of Westminster from June 2004 to June 2005.[4] He has since been very critical of the Church's leadership, saying that the “fundamentalist” character of today's Vatican is out of step with the secularism and social liberalism of modern Britain (indeed of many British Catholics).[5]

In 2005 Sir Stephen joined the UCL Council, the governing body of UCL (University College London) The Council's job is to set the university's strategic direction. In 2008 he was appointed Chair of the Council and served until 2014.[7]

Sir Stephen was also the College's LGBT Champion. He has said:

"Some gay and lesbian staff members are wary about being open about their sexuality. Not all Departments are comfortable places to be gay. ... UCL should be a place where all of us, whatever our identity or orientation, feel equally valued, respected and able to be open about who we are."[8]

For most of Sir Stephen's 35 years at the Foreign Office, being openly gay was a sackable offence. He has described how he denied his sexuality to himself for 20 years. It then took him another 20 years to do something about what he called the “cork in the bottle”. He finally came out to his family in 2009 and later came out publicly.[9]