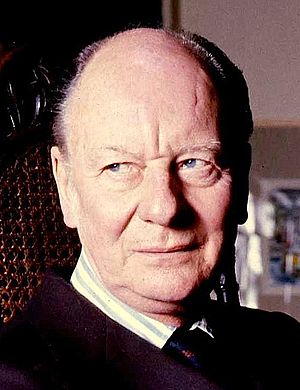 Gielgud in 1973, photographed by Allan Warren
Sir Arthur John Gielgud, OM, CH (14 April 1904 – 21 May 2000) was an English actor, director, and producer. He achieved early international acclaim for his youthful, emotionally expressive Hamlet which broke box office records on Broadway in 1937. He was known for his beautiful speaking of verse and particularly for his warm and expressive voice, which his colleague Sir Alec Guinness likened to "a silver trumpet muffled in silk". Gielgud is one of the few entertainers who have won an Oscar, Emmy, Grammy, and Tony Award.

John Gielgud's maternal grandmother was the actress Kate Terry, sister of other actors including Ellen Terry. His father was of Polish Cathoic descent.

Gielgud lived and worked in an era when there was a conspiracy of silence around homosexuality outside of theatrical circles. Shortly after he was knighted, Gielgud endured a horrific humiliation. In 1953, he was convicted of "persistently importuning for immoral purposes" (cottaging) in a Chelsea mews, having been arrested for trying to pick up a man in a public lavatory.[1][2] Gielgud avoided Hollywood for over a decade for fear of being denied entry because of the arrest.[3] There was much discussion behind closed doors about whether his career could endure the ignominy, but he continued to rehearse the play in which he was scheduled to direct and act. Instead of being rejected by the public, he received a standing ovation at the play's initial opening in Liverpool, in part because of his co-star Sybil Thorndike; Thorndike seized him as he stood in the wings unable to bring himself to make his first entrance and brought him onstage, whispering "Come on, John darling, they won't boo me." Biographer Sheridan Morley writes that while Gielgud never denied being homosexual, he always tried to be discreet about it and felt humiliated by the ordeal. Some speculate that it helped to bring to public attention a crusade to decriminalise homosexuality in England and Wales.[4][5]

The "Gielgud case" of 1953 was dramatised by critic turned playwright Nicholas de Jongh in the play Plague Over England and performed at the Finborough, a small London theatre, in 2008, with Jasper Britton as Gielgud. In 2009 the play was presented for a limited run at the Duchess Theatre, in London's West End, with Michael Feast (who had worked with Gielgud) in the main role.

Gielgud's long-standing professional relationship with producer Hugh "Binkie" Beaumont had its personal side as well. Gielgud's first significant lover, playwright John Perry, left Gielgud for Beaumont. Later, Perry went on to partner Beaumont in the H M Tennent organisation, within which Gielgud continued to work. Beaumont, himself closeted outside the theatrical community, was a very powerful producer who oversaw a great deal of high-profile and artistically ambitious work. He stood behind Gielgud during the 1953 scandal, and, with Perry, took the risk of backing Gielgud's Queens' Theatre season. However, Morley's biography states: "Binkie ... was ... to keep him ... on such an extremely tight salary that it wasn't until Gielgud first escaped to Hollywood in 1953 that he began to earn the kind of money that Olivier and Richardson and Redgrave had earned for decades."

In the same biography, Keith Baxter remarks on Gielgud's private life: "...the theatre was always much more important to John G than any private relationship..." Longtime partner Martin Hensler died in December 1998, 16 months before Gielgud's own death in 2000.[6] He publicly acknowledged Hensler as his lover only in 1988, in the programme notes for 'The Best of Friends', which was his final stage performance.

Sir John gave the opening address at the Queen Mother's 90th Birthday Celebration Gala at the London Palladium in 1990, referring to a glittering array of stars and personalities assembled saying that because of the love and affection in which she was held they were laying at her feet, this rather large Birthday present, which provoked tremendous approval. He also read from Alan Bennett's 40 Years On, in which he had appeared in earlier years.[7]

Laurence Olivier's friendship with Gielgud was peppered with barely acknowledged competitive tension, for, while Olivier's fame as a film actor eventually eclipsed Gielgud's, Gielgud had been the great Shakespearean actor when Olivier was just coming up and that was hard for Olivier to forget. Gielgud maintained a very close relationship with Olivier's second wife, Vivien Leigh, throughout their marriage and divorce, and her long struggle with manic depression. In Curtain (1991), Michael Korda's novel based on the marriage of Laurence Olivier and Vivien Leigh, Gielgud becomes "Philip Chagrin".

Another fictionalised Gielgud – this time given the family name "John Terry" – appeared around the same time as de Jongh's play in Nicola Upson's detective novel An Expert in Murder, a crime story woven around the original production of Richard of Bordeaux.

John Gielgud died of a respiratory infection and was cremated at Oxford Crematorium.