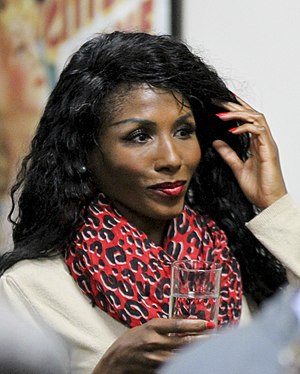 Sinitta
Sinitta (Sinitta Renay Malone) is a singer and actress.

She was born in Seattle, USA, but has lived in the UK for most of her life. She is best known for her hit records in the 1980s including "So Macho", "Toy Boy", "Cross My Broken Heart" and "Right Back Where We Started From". She has also acted in a number of West End shows, been a mentor on The X Factor and appeared as a contestant in I'm a Celebrity... Get Me Out of Here! and the first series of Channel 4's The Jump, which sees contestants train and then compete in winter Olympic sports.

She gave her backing to the Out4Marriage campaign: her campaign video explained her support for the right of same-sex couples around the world to marry. She was listed among "Straight Allies" in the World Pride Power List 2014.