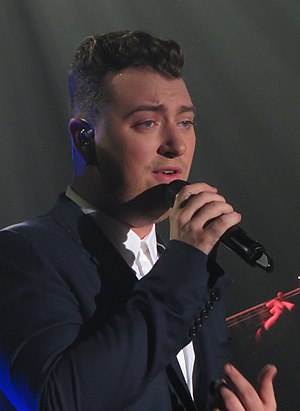 Sam Smith
Sam Smith (born 1992) is a singer and songwriter, who has sung with the bands Disclosure and Naughty Boy.

He was born in London and went to school in Bishop's Stortford.[1]

In May 2014 he came out as gay, acknowledging a former relationship with the actor and model Jonathan Zeizel.[2][3] At the 2015 Grammy Awards he said, "I would like to thank the man that I fell in love with last year - the man who this album is about. Thank you so much for breaking my heart, because you got me four Grammys!".[4]

"The 22-year-old soul singer is the UK’s biggest new musician of 2014, with massive sales of his debut album. During the promotional rounds, he revealed it was written about his love for a guy, making him a rarity – the pop star who comes out at the beginning of his career."[5]

In 2015 he won the Brit Awards for British Breakthrough Act, and Global Success.[6]